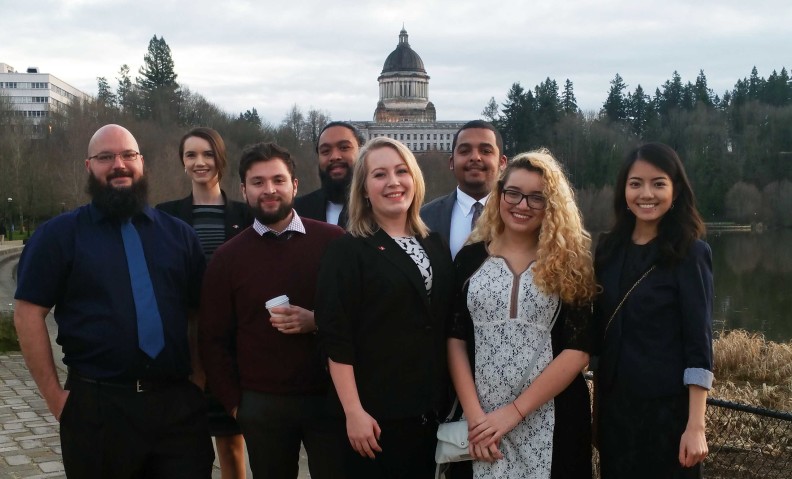 EVERETT, Wash. – In late January, WSU North Puget Sound at Everett students sent members of their student government to meet with state legislators in Olympia as part of Coug Day at the Capitol. Throughout the day they discussed a broad array of topics important to students throughout the Washington State University system, with representation from student government bodies and students at each of the other campuses.

“Coug Day at the Capitol is the best opportunity for students to really be heard within the state government. Many times, students underestimate how much influence we can have within our government, but by sharing our stories we can enact real change,” said Wendy Hughes, who serves as the director of legislative affairs for the Associated Students of Washington State University Everett.

To students in Everett, it was critical that they say thank you to legislators for supporting the funding of WSU North Puget Sound at Everett and the new, state-of-the-art facility in Everett that will be ready for students in the fall of 2017.

“Legislators are excited about the opportunities WSU North Puget Sound at Everett presents in agriculture and engineering that will grow in the coming years. Being involved with Coug Day at the Capitol has not only grown my knowledge of my community and school, but has increased awareness with those community leaders that can make a significant difference,” Hughes said.

In total, 110 WSU students took part in some 65 meeting with legislators and staff. The event is organized each year by the Associated Students of Washington State University (ASWSU) to support student involvement in higher education issues and the ASWSU legislative agenda. The ASWSU agenda includes college affordability, open-source textbooks and transparency in university spending.