The first story Adam Householder was assigned at the Snohomish County Tribune was about white-nose syndrome in bats. He was determined to do a good job but, he says, he “didn’t know anything” about bats let alone the fungal disease which causes a white growth on the infected mammals’ muzzles and wings.It was fall 2017 and his first semester in the Edward R. Murrow College of Communication at WSU Everett, and he was new to news writing. So he asked his professor for help. When Clinical Assistant Professor Lucrezia Cuen Paxson called him back, he was driving. “I did not intend to write the piece in the Safeway parking lot,” he says. But that’s what happened.

While she and her husband were at home cooking dinner —

Householder could hear the sounds of vegetables sizzling in a skillet — she coached him through the story, offering suggestions for cuts and rewrites and getting him to think about the audience and why readers might care about this story. In fact, Cuen Paxson, a former London-based correspondent for ABC News, and her husband, John Paxson, a former bureau chief for CBS News in London as well as the former director of news and current affairs for Murrow Public Media at WSU, both weighed in.

“It was kind of a science article, and I hadn’t written anything like that before,” Householder says. “I don’t think there’s anything that makes me feel as vulnerable as my writing and people criticizing it. And (Cuen Paxson) spent like two hours on the phone with me. It was just this incredible process, and it gave me the feeling of being empowered and emboldened.”

Householder, a father of three and Iraq war veteran who transferred to WSU Everett from Everett Community College, shared that story on Twitter during WSU’s 2019 #CougsGive campaign. And he talked about it again as the commencement speaker at his May 2019 graduation. It points to the support he says he felt that he received during his time as a Coug undergrad and non-traditional student.

Householder joined the military after graduating —

from Renton’s Liberty High School. He served as a cavalry scout and designated marksman in the U.S. Army. His service lasted just over three years and included 12 months in Baghdad, from January 2005 to January 2006. His first daughter was born two weeks after he deployed. 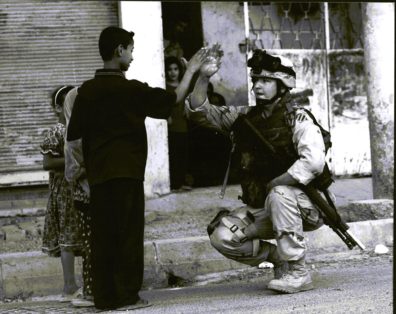 “After I got in the military and I deployed and I saw what that life what like, it changed my views of the world and what I wanted,” Householder says. “It made me question why I was there, what I was doing. It was enlightening. It was both the best and worst experience of my life. I had a lot of pride in it, but it wasn’t the future I wanted.”

On his 22nd birthday, about a month after he returned to the states, his mother died. She had been fighting cancer. Householder grieved and regrouped. He was honorably discharged and returned to the Pacific Northwest from Georgia, where he was stationed. He landed a job as a loss prevention specialist, first at the Nordstrom store in downtown Seattle, then for the Gap and related brands throughout the Seattle area. “It was something I could jump right into and do well right away, and I really needed something at that time to feel confident about,” he says.

to try something new. With encouragement from his second wife, Katie, and oldest daughter, Sophia, he began volunteering at Seattle Humane. That volunteer gig led to a full-time job as a dog training coordinator and behavior associate, then foster coordinator. “I really enjoyed working with dogs that exhibited PTSD,” he says, noting that it helped him deal with his own. “For a while, I denied that I had PTSD. We experienced combat, but I never really had a moment of shell shock, what they picture in the movies. For me, it wasn’t a singular event; it was just a constant strain of stresses. It made me develop my own emotional cocoon.”

At Seattle Humane, he says, “I started feeling like I was getting somewhere and not just traveling linearly, and that helped me cultivate my passion for what I was doing. I found I’m a natural communicator. I like sharing my passions with other people.”

He also found he wanted to return to school. At 32, Householder — who now has two more children, Mercy and Whitman — went back to community college on the GI Bill, something he had tried when he came back from Iraq. He didn’t stick with it then. This time around, he was ready. And he had a major in mind: Integrated Strategic Communication.

He joined the Public Relations Student Society of America and Association for Women in Communications. He became a contributing writer for the Snohomish Tribune and social media intern at the Future of Flight Aviation Center at Paine Field. He was inducted into the National Honor Society and SALUTE National Veterans Honor Society.

of his own at commencement. He encouraged fellow graduates to “get comfortable with being uncomfortable,” telling them to “embrace your vulnerabilities and insecurities. You might learn that full exposure to the elements and environment is the best way to get stronger. Growth is what happens in these spaces. “

He also encouraged them to welcome adversity. “Cherish the hard times because that’s where character and strength are forged. Brave people are not fearless; you cannot be brave without also having fear.”

And, he ended his speech with the signature sign-off of his college’s namesake: “Good night, and good luck.”

Now Householder works in new product introduction marketing at Fluke Corporation, a subsidiary of Fortune 500’s Fortive in Everett, where his story continues.