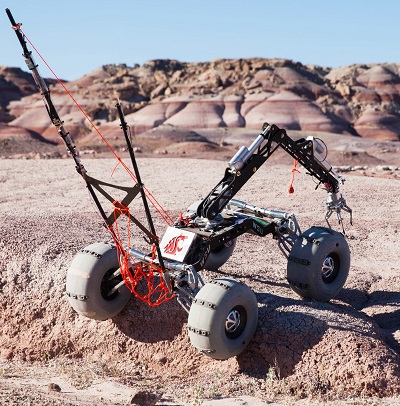 “This is quite an honor for Phil and the WSU Everett Mars rover team,” Dr. Xiaopeng Bi said.

Engel was recognized for his outstanding performance being the science sub-team lead for WSU. The award recognized his extensive knowledge on Mars-related geology, as well as his excellent display of teamwork, leadership and respect to the judges and other teams. He stood out from all competitors at the University Rover Challenge based on the presentation and Q&A on implementation of soil sample scientific analysis.

“This award means the world to me,” Engel said. “I already have plans on framing it and showing it to my kids when I have them.”

Engel prepared for this part of the competition since the beginning of the year.

“I needed to find out how I could determine if life would be able to survive in a barren environment at the competition in Utah and if we were on Mars,” Engel explained. “I talked to a geotechnical engineer on recommendations for soil tests I could perform as well as doing lots of online research on soil geology both on Mars and on Earth.”

Read more about the success of the WSU Everett Mars rover team here.