Bothell, Wash. – Every Monday after school, Washington State University student Brandon Clark finishes his electrical engineering classes at the University’s campus in Everett and drives to Fernwood Elementary in the Northshore School District. Standing before a group of 35 children from ages five to 11, he transforms from a student into a teacher.

Clark, who lives in Bothell, is a volunteer teacher for a science, technology, engineering and math (STEM) program though the YMCA called Kids University.

“It’s a true thrill to see science come alive for these young kids and for them to have fun with it,” Clark said. “I hope that this and other exposures to STEM will help ignite a curiosity which can help them into high school and beyond.” 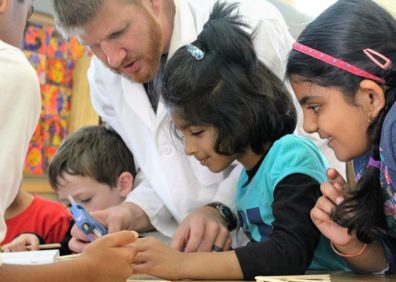 Students in the 12-week course meet to explore STEM learning by planning, designing and building a number of projects. Subjects include exploring density, building bridges and exploring electricity. The final project is a two-liter bottle rocket launch powered by water and air.

“In two- or three-week increments, we spend a class exploring a scientific subject to influence a project and design it. The following week we build and test those designs,” Clark said.

The first major project was designing and building a bridge with popsicle sticks. In groups of five, the children came up with unique ideas about what would work best. Some were clearly based on bridges they had seen. Some designs came only from their imagination.

Now Clark is looking for a couple more WSU Everett students willing to volunteer to keep the program growing.

“I really feel a need to give back. There are so many people that have helped and been a role model for me in my life. I want to pass it on to the next generation,” Clark said. “I look at this class like I looked at my time with Cub Scouts: fun with a purpose. The more fun we have, the more fun the kids have. The other important aspect is to give them an opportunity to learn something.”

Before studying at WSU in Everett, Clark was a commercial diver. “I loved it, but it was dangerous and took me away from home for most of the year which was hard with a young family,” Clark said. He says he chose to study electrical engineering because, “I wanted a secure future for my family, for my kids to know that they can do hard things, and I want to make the world a better place than I found it. Engineers have the training to tackle problems and do exactly that.” He chose to focus on electrical engineering thanks to the job outlook in the region and because he was fascinated by the subject matter.