Everett, Wash. – May 16, 2016 – On May 15, WSU North Puget Sound at Everett held the inaugural commencement ceremony for students at the newest Washington State University campus. While 40 students had previously graduated through campus programs, it was the first time a local commencement ceremony celebrated the achievements of North Puget Sound students.

“This is an important milestone for our graduates, for Washington State University and for this community,” dean Paul Pitre said. “WSU Everett’s growth builds a dynamic, vital connection to our educationally underserved community and to businesses and industries in western Washington that will employ our graduates.”

There were 54 graduates from the mechanical engineering, electrical engineering, hospitality business management and integrated strategic communication programs. They received their degrees at the Future of Flight in Mukilteo with the Alaska Airlines’ WSU-themed Q-400 Bombardier parked behind the stage.

Interim President Dan Bernardo welcomed students and recalled the impact that late President Elson S. Floyd had on creating the campus. “This vision was one that he had about bringing WSU to Everett,” Bernardo said. “Obviously he’s no longer with us, but he’s certainly here in spirit.”

Students were recognized for their academic achievement as well as personal achievements. These included military service, being parents or working throughout their education.

“This isn’t an ordinary commencement ceremony,” said Hayley Statema, president of Associated Students of Washington State University Everett. “Today is an extraordinary day because of the variety of challenges all of us have faced academically and personally.” 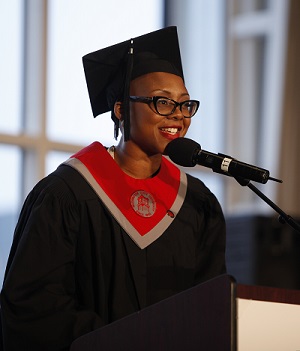 Student speaker Christina Cooper told students, “When I arrived on campus two years ago, I was afraid. Afraid of what would be expected of me, what I expect of myself, or whether or not I could deliver. The reality of being a college student, a wife, a mother of three young girls, Amour, Devine, and Niah – all at the same time! – was absolutely daunting. But as I began to meet and talk with other new students, I learned very quickly that many of them were non-traditional students too.

“Some of them came from the military, couldn’t find jobs, and were returning to school. Others came from the inner-city intent on improving not only their situations, but their family’s too. One student wanted to work in PR in the medical field, but couldn’t get her dream job – not without a college degree. Hearing her stories, meeting my professors who were as passionate about teaching me as I was afraid, it became clear to me I was in the right place, at the right time, with the right people.”

Statema noted the dedication of her fellow students, telling them, “I am driven by the saying ‘do everything with passion or not at all’ and I’ve come to realize that you can’t have made it through this program without being wildly passionate about your career and future. I’ve seen multiple engineers on campus before my 7:45 a.m. class and seen the same engineers still on campus when I leave after my 3:00 – 6:00 p.m. class. Our faculty works tirelessly to teach us and provide hands-on, real-world opportunities within our fields.”

After students received their degrees, the presidents of the Snohomish County and Skagit Valley chapters of the WSU Alumni Association led students, their families and special guest Butch T. Cougar in a loud rendition of the Cougar Fight Song, punctuated by crimson and gray streamer cannons.

Cooper fittingly concluded her remarks by telling students, “Your future is now and it is yours for the taking. I wish all of you great success in all of your careers and endeavors. Thank you for this moment, and Go Cougs!”

View commencement photos on the WSU North Puget Sound at Everett Facebook page. To get a small flavor of the ceremony, you can watch this two-minute, student-produced video: