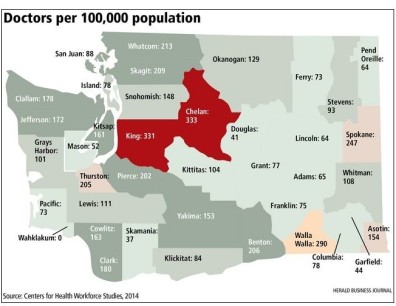 EVERETT — In the not-too-distant future, you may be saying ‘Aaaahh’ to a doctor in training.

The idea is that students will spend the first two years of medical school in classroom work in Spokane but then get their clinical experience and more classroom work either by remaining in Spokane or studying in Everett, the Tri-Cities or Vancouver.

There’s a need in this area for more doctors, said Dr. Joanne Roberts, Providence’s chief medical officer. And the best way to attract more doctors is to educate them in the community.

Everett works well for this, because the city has excellent health providers but also has easy access to rural areas, said Paul Pitre, dean for WSU North Puget Sound at Everett.

Since WSU won the right to open its own medical school, people have been quizzing Pitre about what it means locally.

“When I’m out and around whether it’s in Oak Harbor, Mount Vernon or Everett, people are asking about the medical school and how it’s going to work,” Pitre said. “It really coincides with our land-grant mission where we focus on outreach to communities for education and service.”

The Legislature last year changed a state law that had given the University of Washington sole authority to operate a public medical school in Washington. Lawmakers also appropriated $2.5 million for WSU to start the school in Spokane, which is being named after the college’s late president, Elson S. Floyd. WSU has hired Dr. John Tomkowiak of the Chicago Medical School to be the school’s inaugural dean. The medical school is seeking accreditation and hopes to enroll its first class in 2017.

One of the pitches WSU made to the Legislature was there was a need to get more doctors who are willing to practice in rural areas. WSU envisioned a community-based model where medical students would train in communities around the state.

Right now, 29 percent of the state’s population lives in King County, but 49 percent of the doctors live there, said Ken Roberts, the medicals school’s vice dean for academic and community partnerships. WSU also wants to attract students from these areas, he said.

“You can imagine if a student is from Mount Vernon and had a chance to do a lot of their clinical work in and around Mount Vernon that increases the likelihood they’ll be a physician in Mount Vernon,” Ken Roberts said.

Dr. Erica Peavy, who works at The Everett Clinic and is working with WSU on the partnership, said she’s a product and supporter of the UW Medical School. But she said that she became convinced once she saw WSU’s research that more could be done.

“I think what I see in the young doctors coming out of training, they really gravitate to Seattle,” Peavy said. “The farther you get away from Seattle the more difficult it is to recruit them.”

WSU North Puget Sound at Everett will provide classroom and office and library space for students and faculty in its under construction academic building in north Everett across from Everett Community College.

An associate medical dean and a couple of professors will be based in Everett. And the college will also tap doctors from the area to educate students. “There are a lot of potential faculty members who are at The Everett Clinic and at Providence hospital that have a lot of expertise,” Pitre said. “A lot of them are doing research as well as teaching right now.”