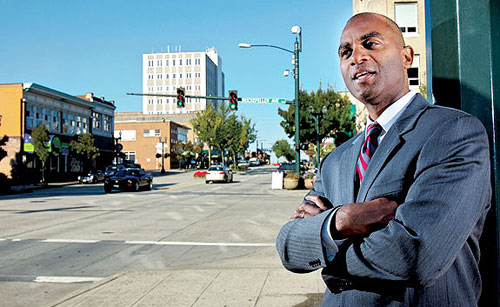 PULLMAN, Wash.—Paul Pitre, who has guided Washington State University North Puget Sound at Everett as dean since 2014, was named chancellor of the Everett campus, effective Sept. 1.

“Paul has demonstrated outstanding leadership skills as dean,” said WSU President Kirk Schulz in announcing Pitre’s promotion. “Enrollment is growing, and we are building thriving relationships with our partners in education and industry in the north Puget Sound region.”

WSU North Puget Sound at Everett has experienced rapid growth under Pitre’s leadership, from one cohort of 23 mechanical engineering students in 2012 to nearly 200 students in five programs today.  Pitre also manages the Everett University Center on behalf of the seven, higher education consortium partners, which includes each public university from the state of Washington.

All undergraduate programs provided at the Everett University Center are transfer-programs, meaning students fulfill their first two years at any community college before finishing their degree by enrolling with a four-year university in Everett for their junior and senior years. This innovative model makes getting a four-year degree more affordable and available to place-bound students. There are currently nearly 600 students at the Everett University Center.

Pitre continues to oversee the construction of a state-of-the-art, four-story WSU building that is being built across the street from the Center’s current location at Everett Community College. On track to open in the fall of 2017, the building will be the new home for all programs offered through WSU North Puget Sound at Everett and the Everett University Center.

“We’re working hard to provide students with local access to industry-aligned, four-year degree programs in the north Puget Sound region,” Pitre said. “Employers in this region are importing the skilled workforce they need, particularly in STEM fields. We’re here to provide students with access to the education, knowledge and skills they’ll need so those employers can find that talent in our community, giving both the opportunity to succeed in a local economy that operates on a global scale. We are developing the north Puget Sound region’s future leadership and I am excited about the opportunities that future will bring.”

North Puget Sound community leaders are also looking for growth in research from WSU, and opportunities for that research to seed a series of new companies in the region. The first initiative is the Joint Center for Deployment and Research of Earth-Abundant Materials (JCDREAM), a research collaborative between WSU, the University of Washington and the Pacific Northwest National Laboratory to accelerate the development of next generation clean energy and transportation technologies, replacing reliance on precious metals with Earth-abundant materials. The legislature established JCDREAM in 2015.

WSU North Puget Sound at Everett will also be home to third- and fourth-year medical students from the Elson S. Floyd College of Medicine as soon as 2019, just like the Vancouver, Tri-Cities and Spokane campuses. Those medical students will get their classroom training in Spokane before getting their clinical training locally with partners like Providence Regional Medical Center and The Everett Clinic.

“The Everett operation is in the very capable hands of my good friend and colleague Paul Pitre,” said Bob Drewel, who served as interim chancellor in Everett in 2014-2015 while Pitre was dean. “Paul played a key role establishing WSU’s presence in Everett several years ago. He has proven himself to be a trusted and effective leader who understands the region’s needs and can work with partners in education and industry.”

Pitre earned a doctorate in educational policy and leadership at the University of Maryland, College Park. He completed a master’s degree in higher education administration at New York University and an undergraduate degree in communication at Western Washington University.