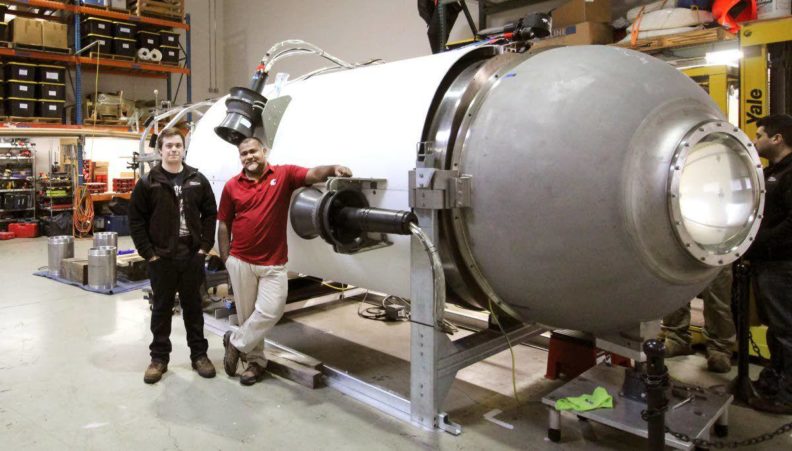 You’ll never catch him taking a dip in the ocean. Paddle around with that huge expanse hidden beneath the surface? Nope, not going to happen.

So you’d think the opportunity to work for an ocean exploration company — one that’s building a five-man submersible to take tourists more than 2 miles down into the briny deep — might be pretty low on Walsh’s list of dream jobs.

But that’s where he ended up, and he’s loving every minute of it.

Walsh is responsible for all the electrical work on the Titan, a carbon fiber submersible the size of a minivan that’s built to withstand pressures that would crush a modern, steel-hulled Navy submarine.

The Titan is undergoing validation testing in the Bahamas. Once the development work is completed, OceanGate will start taking tourists down to see the wreck of the RMS Titanic.

In announcing the excursions last year, OceanGate CEO Stockton Rush noted that, since the famous passenger liner sank in 1912, “fewer than 200 people have ever visited the wreck — far fewer than have flown to space or climbed Mount Everest. So this is an incredible opportunity to explore one of the most rarely seen and revered landmarks on the planet.”

The company currently plans six expeditions to the wreck next summer. Each one can accommodate as many as nine paying customers. They’ll stay on a support ship at the surface during the 11-day trip. Depending on weather and other factors, as many as five dives will take place during that time, with three passengers and two operators onboard for each dive.

The dives are expected to last six to eight hours; the bulk of that time will be spent on the bottom, exploring the shipwreck.

The expedition costs $105,129 per person — equivalent to the inflation-adjusted price of a first-class ticket on the Titanic during its ill-fated maiden voyage. Partial or full credit is available if a dive is canceled because of weather or mechanical issues.

While that’s a bit steep for most Christmas shoppers, Joel Perry, OceanGate’s vice president of marketing, said the customers who have signed up so far typically aren’t uber-rich.

“When we got into this, the assumption was that the lion’s share would be very wealthy,” Perry said. “But that hasn’t been the case. Quite a few of them just have a passion to see the Titanic, and they’re willing to spend a reasonable percentage of their assets to do that.”

Few shipwrecks have attracted as much popular interest as the Titanic. The ship sank about 400 miles south of Newfoundland, Canada, after colliding with an iceberg. More than 1,500 people died.

The voyage has been the subject of at least five Hollywood films — including the 1997 version with Leonardo DeCaprio and Kate Winslet, which won 11 Academy Awards and grossed more than $2 billion worldwide.

Even before Robert Ballard discovered the wreckage in 1985, dozens of schemes were proposed to locate the iconic ocean liner and raise it to the surface. One such effort partially succeeded in 1998, when a 20-ton section of the hull was salvaged; it’s now on display at the Luxor Hotel and Casino in Las Vegas.

A handful of companies have also taken paying customers down to the wreck site. An American couple got married there in 2001; their submersible parked on the bow, mimicking a famous scene from the 1997 movie.

Another firm, RMS Titanic Inc., has legally pilfered more than 5,000 artifacts from the wreck, including the hull section at the Luxor. It filed for bankruptcy in 2016 and is now seeking to sell off the collection.

These actions prompted howls of outrage from the relatives of people who died in the shipwreck. They view any salvage efforts as a kind of grave robbing.

Perry was quick to note that OceanGate won’t collect any artifacts during its dives. In fact, one goal of the expeditions is to produce a 3D digital model of the Titanic’s extended debris field, using high-resolution photos and laser and sonar scans.

A 3D model of the entire site is needed because the ship is decaying. In addition to the damage done by salvage operators, iron-eating microbes are devouring the steel superstructure. By some estimates, the Titanic will no longer be recognizable within a decade or two.

“We will be sharing all of our imagery and the 3D model when the time is right,” Perry said.

OceanGate’s customers will assist with the data collection effort. The company refers to them as “mission specialists,” rather than tourists. During each dive they’ll handle the cameras, sonar and other systems as they are capable. When they aren’t in the submersible they’ll be topside, helping out with the surface support operations.

Having a chance to contribute to the scientific understanding of the most famous shipwreck in the world is a major attraction for 25-year-old Nick Nelson.

Like Walsh, Nelson received his electrical engineering degree from WSU-Everett and went to work for OceanGate in the summer of 2017.

“Being able to record scientific data on something so famous and add to our knowledge of how things erode (in the deep ocean) is one of the most rewarding things about working here,” he said.

Another bonus is that, for an engineer, working at OceanGate is like being turned loose in a candy story. The company only has about 25 employees, so Nelson and Walsh are involved in essentially every aspect of the electrical work, from equipment design to testing and integration.

As Walsh described it, once the carbon fiber hull itself was built, “then it was our turn.”

“Anything that’s needed to monitor human health or the health of the sub, or to communicate with the outside world — all that falls under the purview of electronics,” he said.

That includes the thrusters used to maneuver the sub, as well as the camera and lighting systems, sonar, batteries, GPS guidance and navigation, acoustic communications and interior sensors.

The Titan itself measures 22 feet long by 9 feet wide and 8 feet high. It has a metal frame, as well as a titanium ring and dome that are mated with the carbon fiber hull. The forward dome has a 21-inch viewport. About half of the interior space is used to house electronic equipment and batteries; the remaining passenger space is 10 feet long by about 55 inches in diameter.

“It’s like the back of a minivan with all the seats taken out,” Perry said.

The sub doesn’t have a restroom. Passengers are advised to limit their snacking during the six-hour dive. There aren’t any heaters, either, so they’re encouraged to wear layers of clothing since the inside temperature will be around 40 degrees.

The Titan operates independently, without any physical connection to the surface support ship. The interior pressure will be the same as sea level, so passengers won’t have to undergo any decompression breaks. The exterior pressure, however, is a function of how deep the sub goes.

At the depth of the Titanic wreck site, the pressure on the hull will be 400 times greater than at the surface, or about 6,000 pounds per square inch.

“PSI doesn’t translate very well into something people can intuitively understand, but if you took the sub and laid it out flat, the total weight on it would be about 150 million pounds,” Perry said. “That’s about the weight of an aircraft carrier.”

Navy submarines with 2-inch-thick steel hulls have an estimated crush depth of 3,000 feet. The Titanic, by comparison, rests at 12,800 feet. When it sank, the ship broke in two. The stern section still had air in it. It essentially imploded on the way down. The pressure, combined with the impact on the seafloor, pancaked the passenger decks. None of them are more than a foot thick now.

So given the extreme conditions at that depth, why go with a carbon fiber hull? Why not, say, a nice, thick, hollowed-out ball of titanium?

Perry noted that carbon fiber has been used for decades in the commercial aircraft industry. It handles stress and extreme temperature changes quite effectively, and is substantially lighter than titanium.

“We need a certain amount of mass to submerge,” he said. “Titanium submersibles are physically much larger, and need floats to stay up at the surface. By having a carbon fiber hull, it radically opens up our payload. We’ll be able to take up to five people; no other submersible (capable of going that deep) can take more than three.”

But regardless of what the hull is made of, deep ocean conditions present some interesting engineering challenges. Simple breakdowns, for example, become major concerns when you can’t step outside to repair them.

“It’s not much different than going into space,” Nelson said. “There’s an inhospitable atmosphere outside, so you want to make sure your systems don’t fail — or if they do fail, that you can fix them from the inside.”

One objective of the validation testing is to make sure all the various electronic systems have been integrated properly, so the pilot can operate everything from a touchscreen computer.

Another purpose is to “season” the carbon fiber hull by gradually descending to a certain depth, coming back up and then going deeper.

“When carbon fiber is produced there’s always a few air bubbles in it, and the lattice might not fit together exactly,” Nelson said. “So it needs to settle itself out.”

That settling out or seasoning process produces a series of “microcracks” in the hull. The cracking can be heard at a specific sound frequency. In order to monitor hull health, the Titan has several acoustic sensors that listen for the cracks and make sure nothing unexpected is happening.

“As pressure starts to push in on the hull, you’ll get a matrix shift,” Walsh said. “That’s not a bad thing. By monitoring the frequency, you can see how the hull is doing at any given time. We can also triangulate where the (microcracks) are happening. If the pilot starts to see a lot of events in one particular area, he’ll know whether they need to stop all activities.”

Walsh said OceanGate did destructive testing on a one-third scale model submersible. The acoustic sensors were able to predict a hull failure almost 1,500 pounds per square inch before it actually occurred. That’s equivalent to about 1,000 meters or 3,000 feet in depth.

“It’s amazing how early you can detect what’s happening,” he said.

In unmanned dives earlier this year, the Titan itself has been validated to descend to 4,000 meters, or more than 13,000 feet. It’s now undergoing testing in manned dives.

Neither Walsh nor Nelson have gone that deep, but they’ve both been down in the sub to 100 meters, or about 300 feet. Perry said OceanGate hopes to qualify all of its employees as Level 1 submersible pilots. Depending on weather and other factors, there’s also “a reasonable chance” that some or all of them will be able to dive on the Titanic next summer.

“We’re scheduled to do five dives (per expedition),” he said. “We need to do three for our clients. Any additional dives create opportunities for our crew.”

Given his feelings about open water, Walsh said that wasn’t an incentive in coming to work for OceanGate.

“Not at all,” he said. “I want to build something completely new and then let someone else have fun with it.”

That said, being able to go down in the sub to test equipment he designed and built himself is an experience most engineers never get.

“And once you’re beneath the surface, it’s really serene,” Walsh said. “The only sound comes from the sub itself, and occasionally some marine life. It’s very calming.”