Graduating debt-free was a priority for Cascade High School alumna Hayley Statema. Cost-of-living in Puget Sound continues to increase and the prospect of increased debt is stressful for most students considering a four-year degree. But studies continue to demonstrate that earning a four-year degree creates better opportunities for young people to step into livable-wage jobs quickly.

“Between Washington State University’s (WSU) incredible financial support in Everett and my grandparents, I was able to work my job at Starbucks a little less my junior and senior years, and focus more on going to school and not building debt,” said Statema. That support is critical for first-generation college students like Statema. “Being the first person in my family to earn a college degree helped break the cycle so that when I have kids, they’ll most likely go to college. I’ve come to realize how important it is, and I want everyone to be able to go.”

Statema started planning for her college degree in high school. She attended classes at Everett Community College (EvCC) through the Running Start program, earning credit toward her associate degree. “Running Start was awesome,” she said. “I was able to get most of my associate degree completed and still be involved in my high school, which was important to me.”

In 2014, Statema transferred to WSU Everett, taking advantage of the 2+2, community college to WSU transfer model that promotes affordability in higher education. She received the Everett Scholars Award for her academic achievements and other scholarships for campus engagement as a student leader. She served on the committee that hired WSU President Kirk Schulz and was featured in the Everett Herald as a ‘True Coug’ from Everett.

As a founding member of Associated Students of Washington State University Everett (ASWSUE) and the first student body president, Statema says that she learned how to empower other people to work with her versus just being a boss.

“Being president of ASWSUE definitely shaped the way I lead,” she said. “Through ASWSUE I was able to spend a lot of time with other leaders in the community and experience their leadership styles. I think those experiences formed how I operate in the workplace, and I am more conscious of different personalities. If I hadn’t had that experience, then I wouldn’t be as equipped to do the things that I am doing now.” 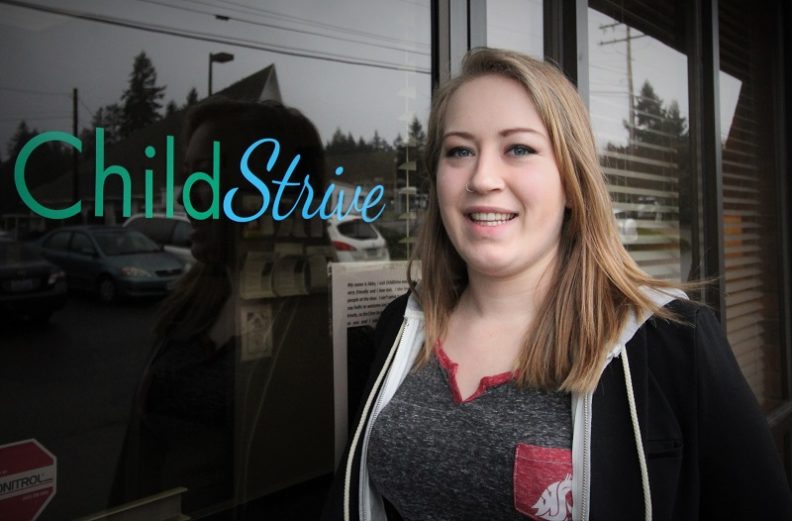 A 2016 graduate with a degree from the Edward R. Murrow College of Communication at WSU Everett, Statema now leads marketing and development for Everett non-profit ChildStrive. The organization helps meet specific needs of first-time pregnant mothers, families who have infants and toddlers with developmental delays or who have experienced trauma or chronic hardships.

“ChildStrive’s mission is to make sure that everybody is ready for kindergarten or whatever their next step is in life,” Statema said. “It’s really cool because if you prevent bad things from happening as a child, it’s been proven that they will be more successful and will face less barriers as they grow up. I love what we do here, and I think it is incredible.”

When Statema found ChildStrive, she immediately thought of her family. “My sister has highly-functioning Asperger’s and I know my parents would have benefited from what we are doing,” she said. “Even though they didn’t know her diagnosis at that time, they knew something was different, and if they had been able to get into services like this, I think that my sister’s life would be different now.”

Engaged in the community

“It’s been really fun because I have maintained a lot the connections I made at WSU. I see them often when I go to Engage Everett and Economic Alliance Snohomish County events,” she said. “I’ve been able to leverage those relationships even more to the benefit of my career and community.”

Always one to support the next generation of Cougs, Statema advises all WSU Everett students to make sure they ask for help. “I think that asking for help is something students are always told, but I don’t think they take action,” she said. “The moment I asked for help during school, problems became resolved.”