Anna Carlson, 23, began her career with a dream: “I’ve wanted to own my own restaurant since I came up with a concept in seventh grade,” she says.

Carlson began working at Red Robin near Bellevue right after completing her associate’s degree at Bellevue College, before becoming the very first transfer student to complete a degree in hospitality business management at WSU North Puget Sound at Everett. She worked her way through college, starting as a host.

“I wanted to learn every single position and aspect of the restaurant industry because this is what I want to do for the rest of my life,” Carlson says. “I want to be the leader in the industry.”

“Sleep? I didn’t even know what it was,” she says.

Those managers, knowing that she was studying hospitality business management at WSU, put her on a path toward management. “They really took an interest in my ongoing development,” she says.

In addition to the cost savings Carlson was able to take advantage of by transferring to WSU, she was able to shape the development of the WSU North Puget Sound at Everett campus. She was even a founding member of the Associated Students of Washington State University Everett, taking responsibility for helping draft the club’s founding documents.

“I really felt like I was able to make WSU Everett my home. I’ll be able to tell my kids, ‘You know that awesome campus you’re going to go to in Everett? I helped start that!’ “

She was also one of the first students to engage with Everett-area industry and community leaders as a WSU student at the new campus. One class gave her the chance to work with the communities impacted by the 2014 Oso mudslide that took 43 lives. Her work was part of a multi-year project that recently culminated in Arlington and Darrington, Wash. being named a finalist in the national America’s Best Communities contest. They were awarded $100,000 to implement their economic redevelopment plan and are now competing for up to $3 million. 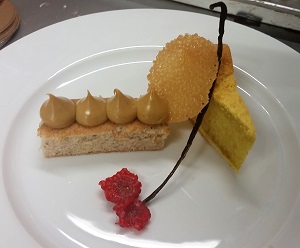 Through strong work by WSU Everett faculty, including program coordinator Mark Beattie, students have had great access to local hospitality companies. Carlson loved the experiences she got through her Food, Beverage and Labor course.

“It was one of my favorite courses, and not just because Mark is an absolutely amazing professor, but because he was able to get us the opportunity to do real-world analysis and work for Bluewater Distillery,” Carlson said. “We were able to take their numbers, take their vision and come up with recipes for their menus and schedules for their staff. We were able to come up with an analysis, but it was as if we opening up our own restaurant. For me that was the most rewarding educational experience I have ever had.”

Carlson took advantage of an array of opportunities afforded to her through her WSU education. 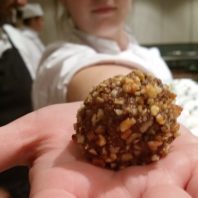 Based on her performance observed by the Apicius chefs, Carlson was asked to join an international team preparing meals for an event at the James Beard House through TuttoToscana, a three-week program in Florence that transfers to New York City for a week of real life events at prestigious locations.

“That was a once-in-a-lifetime opportunity,” Carlson says.

“Traveling to New York City for the first time and enduring long hours in the kitchen while keeping up with assignments pushed Anna to new levels of resilience and achievement,” says Mark Beattie, clinical assistant professor at WSU Everett. “She will draw strength from the experience throughout her career.”

“Every WSU professor I had cared about my development and learning. Mark Beattie and Nancy Swanger, in particular, are rock stars,” Carlson says. “That’s something that sets WSU apart from other universities.”

There is more that sets WSU apart, according to Carlson. “There is no other university that allows these real experiences with real businesses and the study abroad programs,” she says. “Without WSU, I wouldn’t have been able to negotiate as well as I did and move up to management as fast as I did. The things I was able to learn and do at WSU set me apart from other candidates.”

“As a result of good timing and opportunity, Anna was our first North Puget Sound at Everett student to graduate; walking across the stage in December 2015 and into a management training program at Red Robin,” Beattie said. “I am very proud of all that Anna has accomplished and am looking forward to seeing her grow and succeed as a Red Robin Manager – not to mention bottomless fries and strawberry lemonade when I visit.”

After graduation, she was offered a path to management through an eight-week training program at the Northgate Seattle Red Robin location. She completed the program and is an assistant manager at the Red Robin in Factoria, a neighborhood of Bellevue near her home. 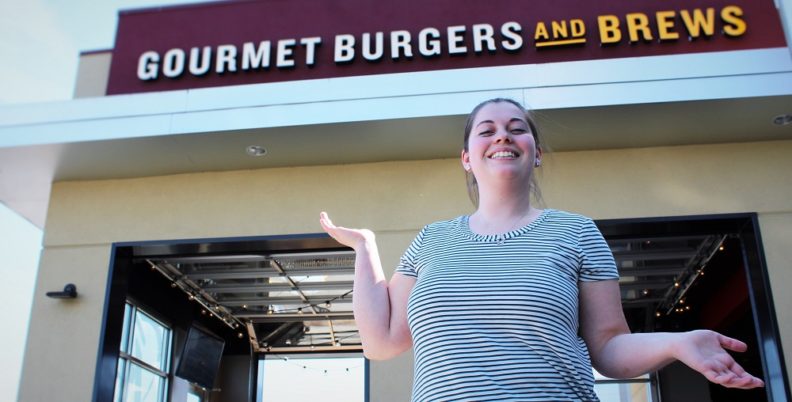